On October 25, 2014, the volunteer team of Trendy International Group walked into Liannan Yao Autonomous County in Qingyuan, Guangdong Province for the first time to visit students of Dongmang Primary School located in Sanpai Town. From the first time we met the students, we were scared by their enthusiasm - students stood in front of the school, clapping hands and crying with tender voices, to welcome us, which made many of the fresh volunteers feel very strange and excited. Trendy volunteers brought the lunch of urban people to the children. At the luncheon, Trendy volunteers talked with the children. They were very interested in the children's daily life and education. The teachers of Dongmang Primary School were also willing to share their usual teaching experience and feelings with the volunteers. The quiet classroom was gradually livened up.

After a special lunch, Trendy volunteers began painting with the children.
Watercolor paint, a common thing for urban children, is special for rural children who only had contact with crayons and watercolor pens before. But it did not affect them to give free rein to their imagination. Trendy volunteers were able to guide and help the children learn how to use the paints, and at the same time to recover their own long-lost childhoods. 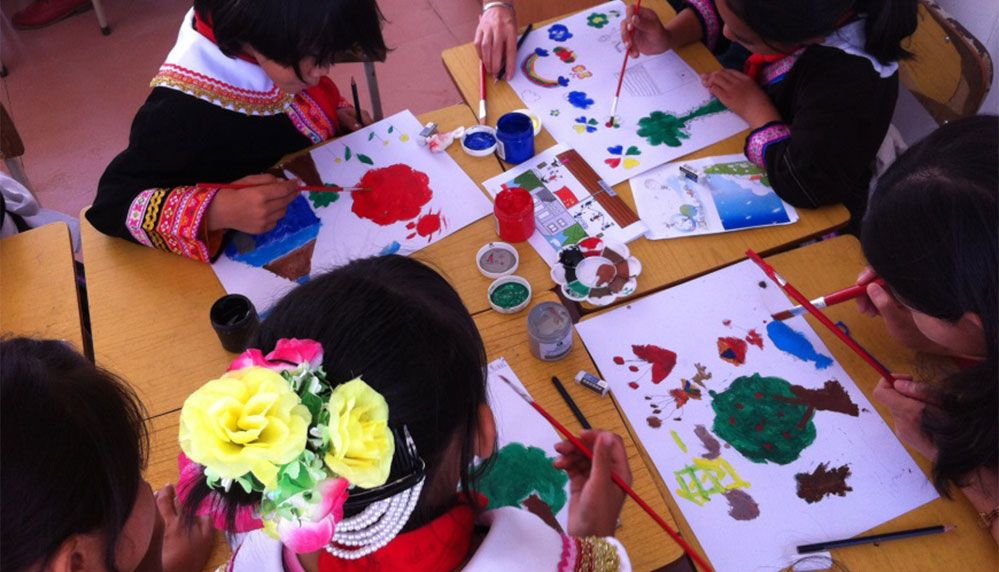 After painting, the children also actively shared their creative inspiration with us. To the surprise of Trendy volunteers, some of the children who did not talk much during painting raised their hands up and could not wait to tell us their thoughts. In addition to the various dreams like being a “painter”, “scientist”, and so on, there were some other unexpected voices: a child said he wanted to build a park, and another child said he wanted to be a ranger when he grew up… Different from the children in big cities, rural children have little contact with many things, but their perspectives are very special. Trendy volunteers could not help but sincerely praise these ideas and gave the prepared brushes to the children.

Arranging the Music Room and Art Room
After painting, Trendy volunteers led the children to arrange their music room and art room together. In the music room, the children were excited to pick up the wall stickers and paste them on the wall of their music room. Before the activity, Trendy International Group had donated the first musical equipment to Dongmang Primary School in order to begin meeting the demand of children for music classes. But the significance of art is not limited to this. Trendy International Group wants the children to experience the joys that art could bring for them in an environment full of creativity. Under the guidance of the Trendy volunteers, the children cut each pattern with scissors and carefully pasted the stickers on the walls and windows. Children’s creativity is inexorable. They won’t work simply by following the schematic diagram. They will add their creativity and ideas in the process. The blank walls were pasted with colorful patterns just like the children’s hearts were filled with happiness.

In the art room, Trendy volunteers and students also worked in full swing.
The trace of wall bricks can be seen on the yellow stripped wall. Since stickers did not work on the wall, Trendy volunteers came up with a more innovative approach to decorate it – wall painting. Dozens of rural children and Trendy volunteers painted their ideas freely on the wall to revive its unexpected beauty. The rural children brought their beautiful home grasslands and rainbows, mountains and the sun, airplanes and the sea, as well as their expectations for the unknown world into the art room. Trendy volunteers also wielded their impromptu ideas and brought the new landmark of Guangzhou to the children, which attracted bursts of exclamation. The children also printed colorful flowers with their palms, making a splendid mark to the change of the art room. 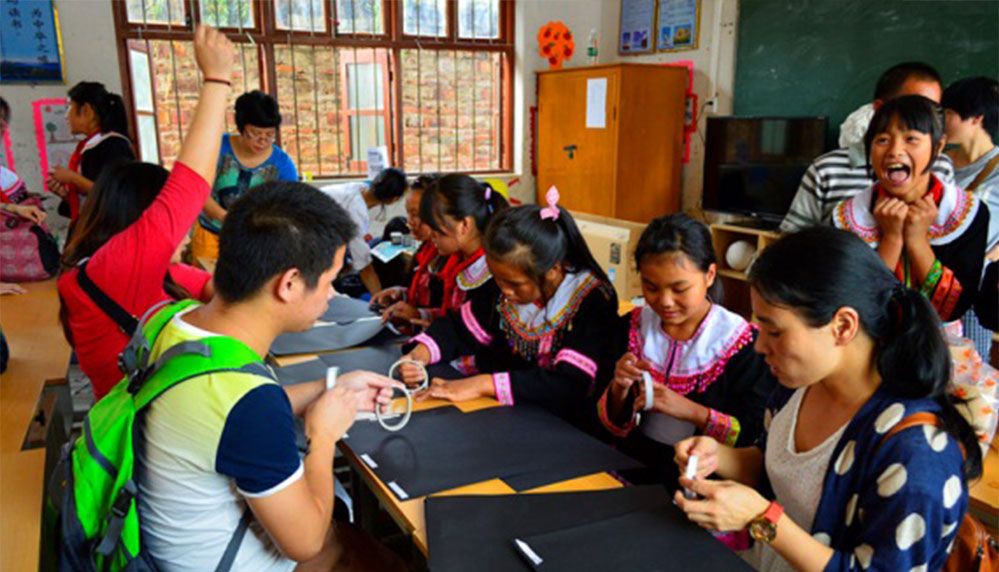 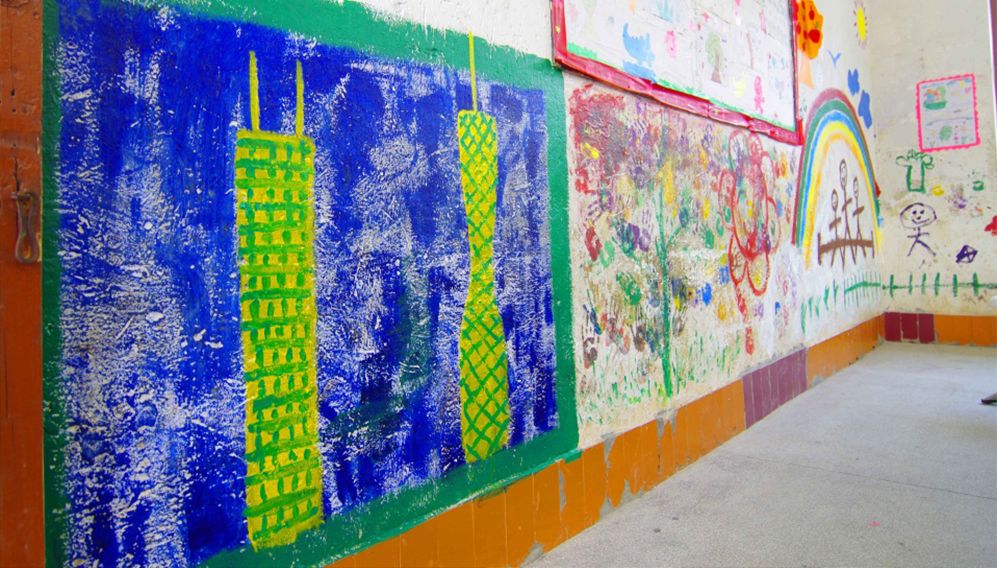 Outside of the art room, the children hung up their works that they had just finished. The children had never thought their works could be transformed into artworks to decorate the outside of the art room. The little change brought a new look to the ordinary rural art room. More importantly, the children’s confidence was inspired by way of art. Art is touchable. Where there is creativity and a sincere heart, there is change.

Before the end of the activity, I asked a fifth-grade girl standing in the playground watching the art room, “What do you think of the activity?” She was somewhat shy with her head down and answered “It’s fun.” I asked her again, “Have you ever done these activities before?” She said, "No, previously we just casually played for fun and never tried like this." Children's way of thinking is straightforward and simple. They have a clear standard for "Casual playing" and "Serious playing" in their minds. The way that Trendy volunteers play might let them get insight into the meaning of “playing”.

From the children’s faces, Trendy volunteers saw the true happiness and excitement. How many of the dozens of children will become artists in the future? It is unpredictable, but Trendy volunteers hope to inspire children to think and to stimulate their creativity by way of art, so that there will be more choices in their lives.